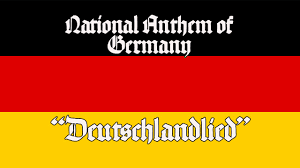 
Published on Dec 30, 2012 Words by: August Heinrich Hoffmann von Fallersleben Music by: Joseph Haydn Adopted: 1922, abolished 1945, restored 1990 Slovak Radio Symphony Orchestra The text of the anthem has been written in 1841 by the liberal poet and professor August Heinrich Hoffmann von Fallersleben, using the melody of the Austrian imperial anthem "Gott erhalte Franz den Kaiser" (God save Franz our Emperor), which has been composed by the famous classical composer Joseph Haydn in 1797 and which appears in his "Emporer Quartet". Hoffmann von Fallersleben wrote his text on the small island of Helgoland off the Northwest German coast, which at that time was under British rule. He had been deported from the Kingdom of Hannover because of his liberal ideas, which included the demand to establish Germany as a unified nation. Consequently, the first verse of the "Lied der Deutschen", beginning with the words "Deutschland, Deutschland über alles" (Germany, Germany above all) was originally meant as an appeal that the idea of a unified Germany should be more important than the many particular principalities which existed at that time.After Germany had become reunified on 3rd October 1990, Federal President Richard von Weizsaecker confirmed in a letter to Chancellor Helmut Kohl, dated 19th August 1991, that the third verse of Hoffmann von Fallersleben's "Lied der Deutschen" with Joseph Haydn's melody are the official national anthem of the reunified Germany. Contrary to popular belief, no stanza is currently forbidden to be sung, however, only the third stanza is the official national anthem, sung on official state occasions; other stanzas may be performed for other uses. German lyrics Einigkeit und Recht und Freiheit Für das deutsche Vaterland - Danach lasst uns alle streben Brüderlich mit Herz und Hand! Einigkeit und Recht und Freiheit Sind des Glückes Unterpfand. Blüh' im Glanze dieses Glückes, Blühe, deutsches Vaterland! Blüh' im Glanze dieses Glückes, Blühe, deutsches Vaterland! English translation Unity and Right and Freedom For the German Fatherland! After these let us all strive Brotherly with heart and hand! Unity and Right and Freedom Are the pledge of happiness. Bloom in the splendour of this happiness, Bloom, my German Fatherland! Bloom in the splendour of this happiness, Bloom, my German Fatherland!